So let go, go, go of the past now
Say hello to the light in your eyes
Yes, I know that the world’s spinning fast now
But you gotta run the race to win the prize

It was a wonderous, heaven-like moment in time. The 60’s.  Heaven and Hell.  We got the Kennedys and the Kings, we got rid of a president, we ended what was then the longest war in our history. The courts incrementally moved us forward and then threw the doors open with Roe v. Wade.  Before that historic ruling, I held the hands of too many young women I knew who had to seek abortions the only way they could, on the black market. They survived but not without scars that I know linger still, 60 years later.  After Roe there was still handholding, commiserating, rationalizing, but at least the access was legal, sterile, and medically sanctioned and overseen. The emotional toll was, and is, still there but it was tempered with a soft landing of gratitude that the world had indeed shifted, and these decisions were in their proper place at last, in the hands of these women.

It was also a hellish foreshadowing of the times to come though we, naifs that we all were then, truly believed that the martyrdoms of the Kennedys and King would lead us into a world of more understanding and rationality.  We were, after all, the infamous Generation of Love, we would vanquish hate and reorder the world’s priorities and if it took the vicious murders of our folk heroes then we were right in line with the great movements, and losses, of eons of the past.  Joan d’Arc had nothing on what we were accomplishing today in our “modern” era. 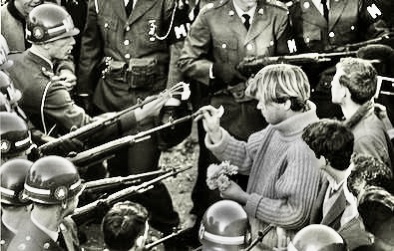 Dr. Martin Luther King Jr. said in “Remaining Awake Through a Great Revolution”, a speech given at the National Cathedral, March 31, 1968.

“We shall overcome because the arc of the moral universe is long, but it bends toward justice.”

He was dead four days later.  And yet, we still believed.  We believed in the intrinsic goodness that King postulated in his last speech. We believed in our twenty-something minds that the “moral arc of history” would be realized in our time. It appeared to be happening!  There were more celebrations than funerals…for a while, and there were reasons to believe in reason and reasonableness.

Yes, we got some horrendous, war-mongering presidents in the ensuing generations. Yes, injustices were still perpetrated on the masses by the few. Yet through it all, we really, really, believed.  We believed that our generation, the one after The Greatest Generation, the one founded and grown out of the decimation of the world and the targeted extinction of certain peoples simply for being born, was the generation that Love would inform, and Peace would rule.

And Then They Didn’t

I refuse to mention any of the names of the puffed-up plutocrats who have now superseded our beloved Age of Reason, they are not worth my time, and I firmly believe that as Dan Brown once said, “So long as they speak your name you shall never die.” I want them to die.  I will not speak their names. I turned off the news after the last election in 2020.  I scan a headline; I post nothing political because I feel and fear that it calls into my surroundings the evil that is fomenting all around us.  I need my space.  I need my peace of mind. I thought I was succeeding.

And Then I Wasn’t

In the last few decades, we (the royal and the liberal “we”) took our eyes off the ball.  This was exactly what tyrants, totalitarians, and tRumpists counted on. Complacency overtook us.  The world was humming along, the stock market soaring (yeah, we had a couple of downs in there, but we roared right back), and our personal and professional lives were seemingly on a great track.  Lulled by lassitude that we mistook for largesse, we stumbled into our futures without safeguards on our democracy that we did not even know we needed.  We should have been looking.  If history repeats itself axiomatically, then we should have known.  Shame on us.

I will say that once, in 2003, we did get our asses out of bed at 3:30 in the morning, took our homemade posters protesting yet the next war, and drove up the I-280 along with thousands of other Volvos packed with placards and grey-haired compatriots to take to the streets and express our outrage once more.

Did it work? I commented at the time that I thought I had put in my time being tear-gassed and tortured a few wars and a few decades back and, at my age, was I really required to show up yet again?  It felt distinctly different, less fundamentally influential, a less emotional movement as a country, a world, and more a certain cheap imitation of a “war protest” ala those quaint times in those bygone eras.  Even getting rid of that idiot president (who, at the time no one could beat for stupidity and sheer evil), it still took another decade to “end” that war, and really, end?  A shame of a sham once again perpetrated on us all with nary a neigh out of any of us except as cocktail chatter.

Today, the bubble so many of us have floated about in now for years has burst; no Glinda the Good Witch protections and no Ruby Slippers to take us home to Kansas…not that any of us ever really wanted to go to Kansas. It is only the metaphorically simplistic idea of an age of innocence that now, is truly shattered.  Pop. Soap bubbles are so temporal and all this time we touted our own as steel plated with protections guaranteed by “our” constitution.

First, they came for the socialists, and I did not speak out—because I was not a socialist.

Then they came for the Jews, and I did not speak out—because I was not a Jew.

Then they came for me—and there was no one left to speak for me.

The quotation from Martin Niemöller is on display in the Permanent Exhibition of the United States Holocaust Memorial Museum. Niemöller was a Lutheran minister and early Nazi supporter who was later imprisoned for opposing Hitler’s regime.

They are coming for us all, next.  It is written and spoken today by those in power.  The coup is in progress. Their ends are in sight and within their potent reach.  Our futures are uncertain at best.  What is certain is that for those of us born in the middle decades of the last century, the end of our lives will most certainly be filled with images and realities so horrendous in concept that the imagining of them is enough.  We could not stand the truth of their realities.  The worst part is that we will only know the true effects after it is too late.  Gil Scott-Heron said it in 1971:

One final but ultimately brutal and unspoken truth.  If this current assault on women (and men, frankly) is indicative of anything, it is a result of the misogyny that is hard-wired into our America from its inception.  Sure, we were founded by, as all countries were or evolved from, legions of men in power.  Women were chattel, slave-adjacent second or third-class persons devoid of intrinsic human rights and privilege.  Sure, we amended the Constitution a few times to “grant” them certain rights which, in the originator’s own words were for “all men”, but they failed to enshrine women and by default, all “others” (gay, trans, disabled, foreign, etc), into the fullness of our society and therefore able to benefit in a fair and equal manner.

It Is Called The ERA

Really, that is the core of the conundrum.  If the humans in power had been able to exhibit their humanness and stand up, speak truth to power, and PASS the damned ERA we would be in a totally different world today.  We would not be continually counting how many women are in the House, the Senate, the board rooms, the stock exchange, ad infinitum.  Women would be a full-throated antidote to the lunacy that men portend and the violence that they promulgate. The original amendment was written in 1923 by members of the National Woman’s Party, which itself was formed in June 1916 to push for women’s right to vote. After the 19th Amendment was ratified on Aug. 18, 1920, the party turned its attention to the broader issue of women’s equality. The result: the ERA.  Next year, the ERA will be 100 years in the making, or not making as it appears, and truthfully, I am not sure that now, the ERA is even relevant anymore. It will not change hearts and minds and feels like an antiquated historic footnote that is not even taught in schools even though we all need it now, more than ever.  I will leave us all with this.

So long as any number among us remains indifferent to the … rights of our fellow-citizens, or becomes emotionally unbalanced to the point of overriding such rights, they are striking not at our first, but at our last line of defense.

Francis Beverley Biddle was an American lawyer and judge who was Attorney General of the United States during World War II and who served as the primary American judge during the postwar Nuremberg trials.