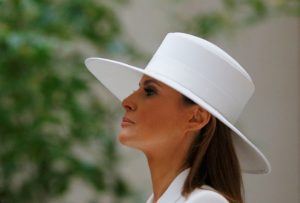 Yesterday, amid all the Pompinstance in the run-up to the first State Dinner of this poor excuse for an administration (btw, 15 months and we are just now getting to a State Dinner? Oh. Right. We have no State Department, I forgot), it seemed that all any of the “news” outlets, readers, faces of the media, etc., could talk about was that fucking Hat.

I refer specifically to CNN’s Brooke Baldwin, someone with whom I have a textbook love-hate relationship. I have taken Ms. Baldwin to task before over her use of grammar in an offensive, to my ear, manner ie:  “exact same”.  Grating, all-too-common, and ear-worming its way into our collective vernacular in a way that ensures it will soon become a norm and not just a nuisance.

On the “love” side of the equation there was her ejection off of her air-space of the former Fox Sports personality Clay Travis for, in her own words;  “It is 2017, and this grown man is on my show talking with me — a female host — about boobs. Is this seriously happening?” Good live, play-action call there, Brooke! I applaud on-air guts.

But back to The Hat.

Yesterday Ms. Baldwin and her Coterie of Commentators for the day spent almost an entire 10-minute segment daintily swooning over Melania and The Hat in their coverage of the run-up to The Dinner.  It’s a State Dinner.  Got it. The media always covers what the First Ladies are wearing, after all there is a highly calibrated scale of correctness about the designers, the colors; white in some countries is a symbol of mourning…in this instance with both Brigitte Macron and Melania Trump sporting white all day one could wish that were in sympathy for the humiliation that the Donald continues to inflict upon Emanuel and the rest of the world, really, but I tend to think it’s Spring. Period.

In all fairness I loved The Hat.

The Hat serves a lot of masters.

Some speculated the The Hat kept The Donald from swooping in for any unwanted faux-kisses, after all the company was French and we all know how the French love a good air-kiss pas de deux.

Others, again referenced the wide brim bumper effect of The Hat, pointed out that once again Donald was playing grab-finger with Melania trying desperately to gain just one good photo-op of him holding her hand, something that she successfully continues to avoid and with good reason. Who knows where his hands have been?

Donald finally, after a painful 13-second digit-dangling offensive, managed to get a few finger encroachment and the much vaunted photo.

Score? Melania a three-pointer on a defensive call. Donald, a foul on simple distasteful displays of pretend affection.

But CNN itself loses the game for the Brooke Baldwin Female Fawning Fest that did nothing other than diminish women everywhere by this display of what can only be described as throwback journalism. This segment would have played well (and no doubt did play well with now dead fashion folk) in the 1950’s.

Bess Meyerson would be proud.

The rest of us in today’s world should be offended and are, in fact, diminished by this overly anti-feminist silliness. Instead of working through the difficult landscape of the business of State-craft in a wasteland of Statesmanship, Brooke Baldwin hiccupped back in all her feminine giggliness, bolstered and burnished to a makeup-perfectness by her co-female-panelists, to what I can only say was an Alice Through the Looking Glass moment for me. I had CNN on as background fodder until I heard Brooke fairly swoon out the phrase “And next, can we talk about The HAT?!?!?! After this break…….”

I actually did a head-snap, hit rewind, and watched the entire segment. I was embarrassed. Embarrassed for her, for CNN, and for the fact that I was intently watching a fashion segment in the midst of a self-induced, world-wide, slow-motion political crisis. Ick. I felt in need of a shower. I actually heard my mother (born in 1912) channeling from the grave, “I actually think she looks good!”.

Yes we are all numb.

The “bombshell” news reports just keep coming like Vietnam-era Agent Orange strafings.   Watching the news is like submitting to Stockholm syndrome conditioning treatments…..willingly. Or maybe not so willingly. We have little choice anymore, our government is what it is; our choices are what they are not.

Impeach? President Pence? Save us all.

Even if the whole upper echelon goes now that Paul Ryan is “retiring” we would not even have him in the line of succession. Where does that leave us in terms of leadership? The White House butler perhaps? Actually, from what I know about him, he’s far more honorable and upright than anyone else in the West Wing currently.

Let Brooke Baldwin speculate on that for a segment.