A Day in the Life of Washington, D.C.

1968 was a pivotal year in America, in the world, in the sixties, and most definitely in the town where I was born, Washington, D.C.

In 1968 I was one of the lucky ones, privileged, spoiled, entitled and able to be going to Sidwell Friends School in downtown Washington, a Quaker school that has, in the years that followed, educated a lot of President’s children from Amy Carter, Chelsea Clinton on through to the Obama girls.  Along with those pedigreed few, there were countless others. In my years alone there I went to school with Joel Brinkley (David’s son) and a host of other minor luminaries.

If only I had known. 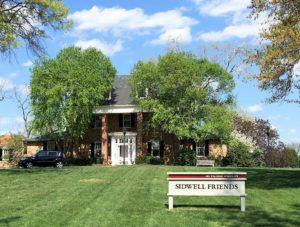 If only any of us had known where we were and what we were witness to in the greater course of history as we were actually living it.

I tell these stories to friends and folks over the years and almost without fail the first thing people say to me is; “You need to write a book!”  Indeed, I should and maybe these blubs that flow out of my subconscious may one day be coddled and cajoled into, if nothing else, a collection of fond and fraught remembrances that chronicle an incredibly fortunate personal global positioning life watermark.

1968 in Washington, D.C. was, in a word, turbulent. Nixon, who had “inherited” (read: helped create a conflict/war in the then unknown country of Vietnam) was doing his level best to foment and ferment a grudging support and acceptance for the conflict that was based on an American First concept of world domination that somehow we as a country had adopted post WWII, conveniently forgetting that Korea had dealt us a severe comeuppance. But we were the USA.  The arbiters of all things righteous and right in the world. Prevailing, at any cost, was rapidly becoming the new normal and our government would push and prod us into a

militaristic-like acceptance of the reality that they, the amorphous all-knowing administration, were to be followed into battle after conflict no matter how many died and no matter what the ultimate goal.

The fallacy was that that there WAS no goal. No end.  No plan.  Just more killing. Just more young men, our friends and companions, being shipped off to a foreign swamp to do their bidding and in the process, killing thousands of civilian residents of a country we were now invading.  And thousands up thousands of our upcoming generation would return maimed and mangled, if they returned at all.

But now, we were a TV generation.

The daily body count became our nightly news anchor to the outside world.  The flag-draped coffins arriving at Andrew’s each night put a klieg-like pinpoint on the actual atrocities that were being committed, by us, in our name, on our best new generation and forever altering the land and culture and people of the folks we had pledged to “protect”.

The battle was waged.  It became us, the ones who refused to submit and obey; the ones who were left behind to guard the home flanks in the only way we knew how. Rebellion, resistance, and a raucous righteousness were the currency we had to work with.  That and our bodies. If our brethren were laying down their lives in a senseless fracas that was not of our doing or to our way of thinking, then the very least we could do here at home was to lay our lives, even if symbolically, on the streets of our towns in a show of solidarity to what we fervently believed was right.

Tear gas is a distinct odor.  More than just a stench, it was a stinging rebuke of our right to protest, peacefully, the actions of our government that we were certain were immoral and illegal.  I first tasted it, a wet handkerchief wrapped around my face and mouth, on the University of Maryland campus as I joined the large mass of students who were marching on the Administration building in noisy, placard-waving protest.  You’ve seen the photos; there is one of me, on the front line, pushing forward against the phalanx of helmeted, armed, war-suited troops that were staring us down.  A dance of advance and retreat between the two sides was eerily similar to the lessons we had all learned in history classes about the waging of war on a hand-to-hand combat basis.

I was still in high school, but the impending Selective Service Registration deadline loomed ever-present.  Soon it would be me, having to make a choice as to how I would respond when “called up” to a duty I found sordid and inglorious. A personal choice certainly, but one that I would make with the informed immaturity that a 17-year-old, buoyed only by my cohorts in resistance and a certainty that anything my parents and their generation who had gotten us into was, by definition, wrong.

I was a privileged, upper-middle class young man, attending The Sidwell Friends School in downtown D.C.  My classmates were the children of news anchors, opinion writers, and the very politicians that I was now forced to confront on the anti-human error of their thinking.  Sidwell was a Quaker school.  Quakers by edict and nature are peace loving above all else.  It is a religion of calm, reasoned, and rational approaches to real world situations but primary in their lexicon; War Was Wrong.

I do not recall ever being taught this in class although we did attend an hour of Quaker Meeting every day where we sat in a square of chairs, in silence for an hour, facing a hollow middle of the room. It was contemplation time to reflect on our sins and examine in our own minds what right and wrong were all about in the world we actually lived in.  If, after a time of deliberate reflection, we were moved to share our thoughts we stood, spoke our reasoned piece, and re-took our seats.  There was no rebuttal, no comment from others. It is not what Meeting is about.  But we certainly thought about what each of the other students and teachers had said and could reflect and discuss it later.

On April 4, 1968 Martin Luther King was killed in Memphis.  The rage was immediate, violent, and reflected the pent-up cistern of anger that had finally boiled over.  The reports started to filter in (this was before CNN) that D.C. was on fire; 14th street, the heart of the black experience then, was being ravaged, looted and burned.  While still a couple of miles away, we began to hear the sirens, see the smoke, and knew that something new and radically different was on the horizon.  This was not a college demonstration, this was a new and unheard-of reactionary eruption of the shared frustration foisted upon us, our cultures, our people, the people of Vietnam, as well as anyone who felt marginalized and managed by the press and the government.

They landed in the parking lot of our school. Troops spewed forth like a foamy wave of a turbulent green sea.  They positioned themselves at the entrances and exits to the school as we all watched, dumbstruck, from our classroom windows and balconies.  And then the quiet, furtive, notifications began among our fellow classmates, at least the ones whose parents had pull and position.  One by one they, the more elite They, were hustled into the waiting choppers and whisked away, out of D.C. and off to a “safe zone” somewhere outside the city.

By now the crowds were starting to swarm out of buildings all around us.  A MetroBus was overturned and set afire on Wisconsin Ave. directly in front of our building.

This shit is serious.

Within a short while almost all the remaining students were gone, fetched by frantic parents and driven north into Maryland and hopeful safety although none of us knew then what was going to actually happen.

My mother, who I rode with daily, was Headmistress at The Holton Arms Academy, another très toney, all girls prep school in Potomac, Maryland.  Normally, I would hop the River Road bus at nearby Tenley Circle and meander out to Holton and meetup with mom for the ride home to the country.  Today, that was a problem.

The phones being clogged to the point of useless I decided to put some serious foot-leather between me and the growing mobs and smoke and cops.  And so, I walked. I had no instant news source to hold in my hand, no phone, and the only smoke signals that were going up were ominous and obvious.

And so, I walked.

The 6 miles took a couple of hours of steady-paced trekking, but I made it.  The news was abuzz and the footage of downtown looked like a war zone.  It did. 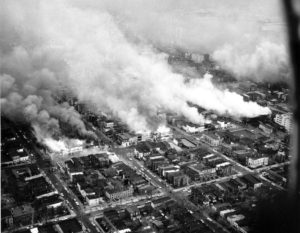 Once home in the far away country the world seemed safe except through the lenses of the TV cameras and even they put a remote, dreamlike quality on the images we watched.  My brother and I were nothing if not adventurous and to our unformed brainpans what could be a better adventure, historic even, than to head back INTO D.C. and see this for ourselves; living history!

And so, driving the farm pickup we did just that. What we saw is indelible; permanent ink-stains on our now aging brain templates.

Sometimes, I can still smell the teargas.

Sometimes, I wonder when it may come again.